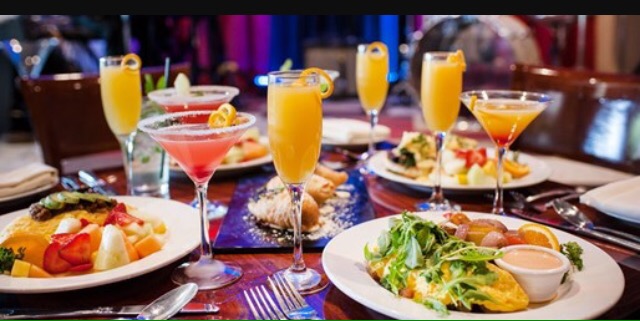 What? Why would anybody want to do anything other than lay in bed with a headache, vow to never drink again (I’m 22 still young and dumb if you’re reading this), and think about how miserable you are for all the fun you had last night. Well I have some suggestions (Not the typical pop a few aspirin and melt away on your couch approach, that’s lame).

If you live in the city and don’t go to Brunch on Saturday or Sunday after a night with friends, are you even a real person? Text your Brunch crew, or friends up for the adventure, something along the lines of, “Brunch. Our Spot. First round of Mimosas on me”.

I’m not a Bloody Mary guy, never have been, never will be. So I dabble with Mimosas. Champagne and OJ. Some Brunch places give you an entire bottle of Champagne with a smaller pitcher of OJ with separate Champagne glasses. Others give you personal Champagne bottles that are about the size of those old school Coca-Cola bottles.

Usually when I wake up in this scenario, I’m starving, have a splitting head-ache, and I’m dehydrated as fuck. So, Mimosas will cure the headache, a meal at Brunch that has eggs, a meat (preferably bangers “sausages”), and a side like Toast will cure my hunger, and chugging gallons of water throughout the day will solve that whole dehydration issue.

Am I inferring that I may or may not be hungover now? No I’m not, because I’m a classy broad and wouldn’t suggest anything of that nature. Is the screen dimmed to it’s lowest output? Why yes, yes it is.

The Fighter & the Kid, Brunch, KFC Radio, Nerdist, Whine With Kelly.
Off the cuff, those are my favorite comedy podcasts. Some, especially KFC Radio are “Would you rather hypotheticals” spoken by lovable degenerates. Not a podcast to listen to without headphones, so beware. The Fighter & the Kid is a podcast where you can learn something too. My favorite segment is “Dropping Knowledge” usually at the end of the show. When they talk about wild animals and how dumb humans are forgetting how savage they can be, because, ya know, they’re wild and all.

Basically just listen to something where you laugh and can forget how miserable you feel. Always works.

This is a mid-day solution. Don’t even think about turning on the TV right when you wake-up. That’s a death sentence, a sin, an abomination, a crime, it’s the worst thing you could do. Go to Brunch then come back and play some mindless games.

What are mindless games? Just Cause 3 is the perfect example. Wing-suit around the island, launch cars off of ramps while bailing out parachuting with a rocket launcher in hand shooting at rebels below. Steal an attack helicopter and create destruction throughout the rebel controlled town.

DO NOT play a game that is new to the point you haven’t played the Singleplayer story. Your not supposed to use your brain for thinking! I said mindless, damnit!

It’s the weekend, depending what’s going on in the day, whether it’s a rainy Sunday or you live in Boston, and the winters are brutal and you’re miserable being snowed-in, take a nap. Personally I don’t do this, but my friends swear by it, so I figured I’d include it.

You probably slept like crap and feel like death so why not put on a peaceful movie and fall asleep. Most girls I know watch crappy Lifetime movies or Rom/Coms on Netflix. I’d probably binge the latest HBO show that’s hot in the streets.

P.S. Have you ever heard someone say, “Wow. I slept great. Who would of thought drinking my face off would lead me to feeling this glorious”. No you haven’t because that has never happened since the existence of life.

6). Sweat it out, Exercise or Work Out (Even Do Yard Work)

Look, I’m not a doctor, but I heard this isn’t the best idea. I also heard that drinking a lot of alcohol on a Friday night while having fun with friends isn’t either. You know who told me that? My brain.

Working out while dehydrated may not be the best idea to go on a 4 mile run and puke my guts out at the end. Did I puke because of the run or the hangover? That’s a rhetorical question because it was likely both. But who feels better? THIS GUY, That’s who.

It builds mental toughness. How? Do that same workout during the week and when you reach that moment of suck, remember you did it while feeling like a dead person. So just keep going and you’ll be alright. This is a stretch but if you’re ever around a bunch of hard chargers, the work hard, play hard saying is a saying for a reason.

Because this is WordPress, many countries and cultures are gathered to share their thoughts on topics. I’m curious to see if it’s generally the same for other countries in their early 20’s to part-take in these types of events. If not and you read this entire blog, you’re probably thinking I’m some sort of crazy person. And you’d be correct.

Some photos used are google images, my Brunch pictures didn’t look as sexy

6 thoughts on “Activities to do While Hungover”